Chicken Noodle Soup is about as basic as it gets, right?  Even the simplest of homemade versions is infinitely superior to anything out of a can.  Even so, I've been bored with mine for a while now.  So to amp it up a bit, I scoured the Internet for a homemade noodle recipe and tried the first one I found.  Egg noodles from a bag will never again float in my chicken noodle soup.  (Well, never say never.  But these are really, really good and well worth the effort.) 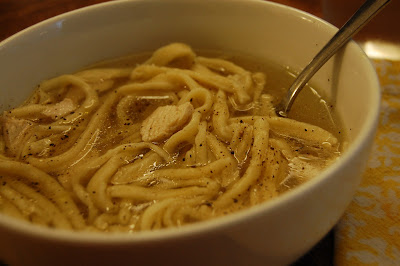 For noodles:
2 large eggs
4 tbs heavy cream (I used half and half- I'm sure you can use whole milk and they'll be fine)
1/2 tsp salt
2 cups flour

In a medium bowl, beat the eggs, then slowly add the cream and salt.  Add flour to the egg mixture, about half a cup at a time.  Blend well with a fork or pastry cutter.  Continue to mix with a fork or by hand until smooth.  On a floured surface, divide the dough into two balls.  Using a rolling pin, roll out the dough until it is as thin as possible. 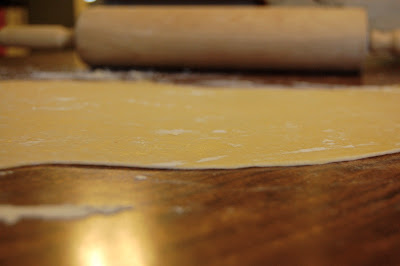 Slice dough into thin strips, using a pizza cutter or a sharp knife.  Cut those strips into 2 inch lengths.  Place the dough strips on wax paper.  Allow to dry at room temperature for 30 minutes.  (Don't do what I did and assume they'll be fine if they overlap a bit.  They won't.  They'll stick together and you'll lose quite a few noodles this way.) 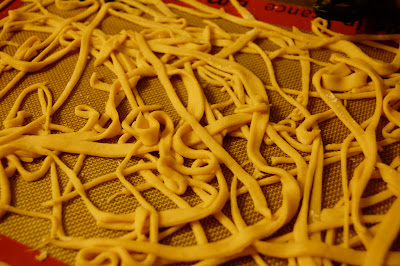 For the soup:
12 cups chicken stock- preferably homemade (I only had 8 cups so I used 4 cups of water and added more salt and pepper to the end result)
2 carrots, peeled and chopped
2 stalks celery, chopped
1 dry bay leaf
2 cups cooked chicken, shredded
salt and pepper to taste
parsley to finish, if your family doesn't scream at the sight of green things in their soup

In your biggest pot, heat 2 tbs olive oil over medium-low.  Add carrots and celery and season with salt and pepper.  Cook, stirring occasionally, until vegetables are tender, about 10 minutes.  Add chicken stock and bay leaf and raise heat to medium-high.  Bring to a boil.  Add noodles to the boiling broth and cook until tender, about 10 minutes.  Add chicken and warm through, about 2 minutes more.  Season to taste with salt and pepper.  Remove bay leaf. Garnish with parsley, if desired.

(My soup pictured above is obviously veggie-free, simply because my house was veggie-free that day.  Even so, that bowl of chicken, broth, and homemade noodles is probably the best bowl of soup I've ever had.)
Posted by keely at 7:44 AM

keely
wife and mother, among other things.